Probably no other holiday in America is more deeply entrenched in food tradition and superstition than New Year’s.

While the first recorded festivities celebrating the arrival of the new year date back 4,000 years to ancient Babylon, it was Julius Caesar who originally established January 1 as the first day of the year, with the introduction of his Julian calendar in 46 B.C. Then, in medieval Europe, Christian leaders, believing the merriment associated with the new year was far too pagan and

unChristian like, replaced January 1 in favor of “more significant” religious days, such as December 25 (the date of Jesus’ birth) and March 25 (Feast of the Annunciation). However, January 1 was reestablished in 1582 by Pope Gregory XIII and his Gregorian calendar, the one most used today throughout the world.

In America, New Year’s celebrations start on December 31 (New Year’s Eve) and continue into the early hours of January 1 with parties, fireworks, concerts, and, of course, lots of food and drink. Exactly which foods, when eaten as part of the New Year’s first meal, are thought to bring prosperity and good luck during the coming year, depends largely on one’s location and ethnic background.

Pork, with its rich, fatty meat, has long been a symbol of wealth and prosperity. The pig is also considered a symbol of progress because they always move forward when rooting for food, unlike chickens and turkeys that scratch backward when feeding, representing setbacks and struggles. American Southerners favor ham and ham hocks, while Midwesterners and Pennsylvanians prefer pork ribs, chops, and kielbasa cooked with sauerkraut.

Fish is another food considered to be lucky. Its silvery

scales are said to be reminiscent of coins, they travel in schools which symbolizes abundance, and they swim forward to symbolize progress. The Chinese believe that serving the fish with head and tail intact ensures a good year, from start to finish. Crustaceans, such as lobster, shrimp, and crawfish, should be avoided since they scuttle backwards.

Cabbage, kale, chard, and other greens are thought to bring good luck by several cultures because their green leaves are symbolic of money and economic fortune. In the southern states, collards are the greens of choice. The Danish tradition is stewed kale sprinkled with cinnamon and sugar, while Germans and Poles enjoy sauerkraut, and the Irish boil cabbage with potatoes.

Legumes including beans, peas, and lentils are also symbolic of coins. And because they swell when cooked, they are said to symbolize increased financial rewards. Italian families customarily cook their lentils with pork sausage to doubly ensure luck. In the southern states, the tradition is to eat black-eyed peas–one pea for each day in the new year–in a dish called hoppin’ john.

Cornbread is a favorite New Year’s treat in the American south because its color symbolizes gold. To ensure even more luck, some people add corn kernels, which are representative of golden nuggets. Living in the south is not required.

People from Spain, Portugal, Mexico, Cuba, and other Latin backgrounds have a tradition eating twelve grapes before the last stroke of the clock, each representing a month of the new year. Every sweet grape means a month

of luck and good fortune; every sour grape, a month of disappointment. Other good luck fruits include figs–a symbol of fertility and pomegranates whose many seeds symbolize prosperity. 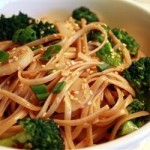 Eating long noodles, especially soba noodles, on New Year’s Day are thought by many Asians to bring long life. The longer they are, the better. But it’s considered bad luck if you break the noodle before getting it all into your mouth, so slurp carefully.

Ring-shaped cakes and other round baked goods eaten on New Year’s are considered by many cultures to bring luck and the assurance of good fortune. In some cultures, a coin or special trinket is baked inside and whoever gets the surprise is guaranteed good fortune for the coming year–unless of course they break a tooth.

So there you have it. Ten ways to start your new year off right. Whatever juju you choose, we hope 2013 brings you all the success and good fortune you wish for. In the meanwhile, let’s all tip our glass to another round as we sing Auld Lang Syne, and wait for that giant ball to drop in Times Square.

“The worst Christmas gift is fruitcake,” cracked Johnny Carson on the Tonight Show. “There is only one fruitcake in the entire world, and people keep sending it to each other, year after year.”

We all hear the infamous fruitcake jokes year after year: “Why does fruitcake make the perfect gift? Because the U.S. Postal Service hasn’t found a way to damage it.” And, “If you don’t like it, use it as a doorstop.” But the epitome of all fruitcake jokes has to be the Great Fruitcake Toss held each year in Manitou Springs, Colorado, where people pitch them, launch them, toss them – everything but eat them. And if you don’t have your own fruitcake they’ll rent you one for a dollar.

People either love fruitcake or they hate it.

Fruitcake dates back beyond Roman times when the recipe included pomegranate seeds and pine nuts. Fruitcake was used to sustain Roman Legions during their long, arduous campaigns, as well as the Christian armies during the Crusades.
Why Christmas became synonymous with fruitcake seems to be unknown, but it is thought to have been started by English nobles who passed out a slice of plum cake to poor carolers in the late 1700s.

Europeans have been baking the dense, spirit-drenched cake for ceremonial celebrations such as religious holidays, weddings, christenings, and birthdays since the early 18th century. In England, it is still a custom that if unwed guests put a piece of wedding cake–usually a dark fruitcake–under their pillow, they will dream of the person they will marry. And of course, a Victorian tea would not be complete without a few slices of fruitcake.

Fruitcake is thought to have made its appearance in America during the Revolutionary War. By the late 1800s, decorated tins became the packaging of choice for this hefty confection, and in the early 1900s, a Texas company founded the first fruitcake mail-order business.

Some of you may raise the question, “Does anyone really eat fruitcake?” According to a survey conducted by an independent research company, the answer to that question is less than one-third of the people surveyed admit to eating it, except in the South. It seems Southerners are a bit fonder of fruitcake – over forty percent say they not only eat it during the holidays, but actually enjoy it. Perhaps this is a result of the two most prominent bakers of this fruit and nut laden delicacy in America being located in rural Southern communities. Also the South’s abundance of pecans and walnuts is thought to be the reason why modern fruitcake recipes contain such a plethora of nuts (“nutty as a fruitcake” was coined in 1935).

In spite of this evidence, it’s apparent that people everywhere do eat fruitcake. After all, annual fruitcake sales in this country exceed $100 million. That’s equal to more than 20 million cakes. Even the Great Fruitcake Toss can’t dispose of that many cakes.

So for those of you who truly enjoy this traditional Christmas treat, we hope you’ll try our recipe for a delicious Old-South Fruitcake that is dark and moist. In it the candied fruits have been eliminated in favor of dried fruits, as we believe they are more palate pleasing.

And for those of you who hate fruitcake, sit back, have a double shot of eggnog, and hope Aunt Millie doesn’t give you another doorstop this year.