Some of my fondest childhood memories are centered around helping my mom in the kitchen. She was a terrific cook whose dishes, although simple country fare, were always flavorful and extremely well 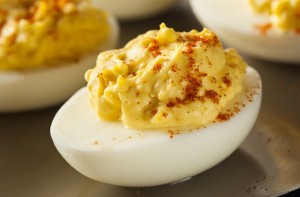 prepared. Among some of my favorite foods were those she made for holidays and other special occasions such as birthdays and church potluck dinners.

One such dish was her deviled eggs, the stuffing prepared with the yolk of hard-boiled eggs, a little mayo, prepared mustard, finely chopped sweet pickles, salt and pepper. After she spooned the stuffing back into the egg white cavities, they were lightly sprinkled with paprika and placed on a special plate used just for that dish. The fact they lasted only minutes after a meal started is testimony of how delicious they were.

As much as some folks would like to credit this dish to the American South, where they are a staple at just about any gathering, deviled eggs got their start in ancient Rome. Boiled eggs seasoned with spicy sauces were commonly served as the first course (referred to as the “gustatio”) of many of Rome’s wealthy patricians.

From Rome, the popularity of stuffed eggs continued and by the 13th century recipes started to appear in Andalusia, a region known today as Spain. An anonymous Andalusian cookbook, as translated by food historian, L.A. Times columnist, and expert in medieval Arab cuisine Charles Perry, includes this recipe for “The Making of Stuffed Eggs:”

Take as many eggs as you like, and boil them whole in hot water; put them in cold water and split them in half with a thread. Take the yolks aside and pound cilantro and put in onion juice, pepper and coriander, and beat all this together with murri, oil and salt and knead the yolks with this until it forms a dough. Then stuff the whites with this and fasten it together, insert a small stick into each egg, and sprinkle them with pepper, God willing. 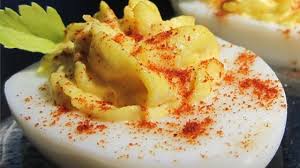 By the 1400s, stuffed egg recipes were commonplace in European cookbooks, and by the 1600s recipes for hard-boiled eggs, their white cavities refilled with yolks blended with all sorts of spices, mustards, and herbs were the norm.

So when did the name deviled egg come about? The first known written mention of “deviled” in the culinary sense appeared in Great Britain in 1786 in an article concerning “devil’d lamb kidney.” By the 19th century the term came to be used when referencing any hot or spicy foods, including eggs, ham, and seafood. It was during that same time period that stuffed eggs came to this country, and with them the term deviled eggs. However in some parts of the American South and Midwest, many religious organizations prefer using the terms “dressed eggs,” “salad eggs,” or “angel eggs” in order to avoid any reference to Satan.

The first printed recipe to suggest using mayonnaise as the binder for deviled egg filling appeared in Fannie Farmer’s 1896 edition of the Boston Cooking School Cookbook, though commercially made mayonnaise was not available until 1907. In fact, it was not until the 1940s that store bought mayonnaise became part of the classic American deviled egg recipe. Today, most families would not think of making deviled eggs without mayonnaise.

Most countries throughout Europe have at least one variation of the deviled egg, although sometimes known by different names. For example, France, Belgium, and Germany serve a version called “Russian eggs,” not because they are of Russian origin, but because they are served on a bed of macédoine (Russian salad) and garnished with caviar. In Sweden, the yolk of their deviled eggs is mixed with caviar, sour cream, chopped red onion, and garnished with anchovy or pickled herring, and they are served as a traditional Easter Smörgåsbord dish. 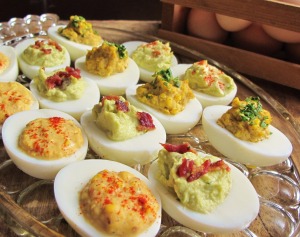 While the basic recipe for “classic” deviled eggs has not changed in this country for over seventy-five years, you will find that every family seems to have their own, albeit slight, variation. Some may use prepared mustard while others may prefer Dijon; some more mayo or less mayo; some pickle relish or, like my mom, finely chopped sweet Jerkins. And with today’s professional and celebrity chefs all trying to outdo one another, there seems to be no limit on filling variations.

But whether you prefer the classic mayonnaise, mustard and paprika filling, or a designer version with kimchi and sriracha, one thing is for sure, the incredible edible egg when deviled is a dish made in heaven.