I’m not exactly sure when I had my first Reuben sandwich, although I believe it was at the lunch counter of a Skillern’s Drug Store when I was about 17 years old. What I do know is that it was love at first bite–the nuttiness of toasted rye, the sweet and sour sauerkraut mixed with thousand island dressing, the thinly sliced tender corned beef, the creaminess of melted Swiss cheese. It came with a large dill pickle spear and potato chips. What, I ask, is there not to like?

The Reuben’s origin, like that of so many of our great foods, has been distorted over time with various claims and counter claims leaving us with only legends and lore as to its real creator.

One such story, for which there are several variations, is that the sandwich was created in 1914 by Arnold Reuben, the owner of New York City’s famed Reuben’s Delicatessen. One major flaw in this version is that his original “Reuben Special” was said to be a cold sandwich made with roast beef, cheese, coleslaw, and Russian dressing on sourdough. What happened to sauerkraut, corned beef, and grilling the sandwich? Another story says the sandwich was created in the 1930s

for Reuben’s son Arnold Jr. by Alfred Scheuing, one of the cooks at the deli, in order to provide a break in Juniors steady hamburger diet brought on by the working such long hours in his father’s restaurant. But there are many distracters of this version.

It’s also rumored to have been prepared for the popular Broadway actress, Annette Seelos (or was it actress Marjorie Rambeau, as some say?) who was shooting a film with Charlie Chaplin. Others say there was no actress working with Chaplin at the time.

The earliest printed reference to the Reuben Special is thought to have appeared in a 1926 issue of New York’s Theatre Magazine. And while some proponents of the New York story offer this fact as proof that the above story of origin is true, it in itself does not provide conclusive evidence as to its veracity.

Perhaps the most plausible story of the Reuben’s origin, at least in my mind, takes place in Omaha, Nebraska, around 1925. It seems that a group of businessmen who called themselves the Committee enjoyed a weekly poker game at the Blackstone Hotel. Out of each pot the players would

put aside a few cents for what they called a “midnight lunch” ordered from the hotel’s room service. One particular night, Reuben Kulakofsky, a regular player and the owner of the area’s largest grocery store, asked that the kitchen make him a sandwich of corned beef and sauerkraut. In response, Bernard Schimmel, a Switzerland trained chef and the Blackstone owner’s son, drained the sauerkraut and mixed it with Thousand Island dressing, layered the mixture with corned beef and Swiss cheese on dark rye bread and grilled it. The sandwich was such a hit with Kulakofsky and his fellow players that Schimmel’s father immediately placed the “Rueben” on the Blackstone’s menu, in honor of the man who suggested it.

An extension to the Omaha story is that in 1956, Fern Snider, a waitress at the Blackstone entered the Reuben sandwich recipe in the National Sandwich Idea Contest and won. According to an article in the September 1956 issue of American Restaurant Magazine: “The Reuben, a hearty man-sized sandwich of corned beef, sauerkraut and Swiss cheese on Russian rye bread, is the nation’s top hotel and restaurant sandwich . . . in which more than 600 different sandwich items are entered from all parts of the country and Hawaii.” And while there are accounts of folks all over the country enjoying the Rueben prior to this contest, it would seem that Fern’s entry brought it national attention, pushing its popularity to that of one of America’s top sandwiches.

So as you can see, there are numerous thoughts and debates on the origin of the Reuben sandwich. There is also a variety of ideas on how this classic sandwich should be prepared:

As for me, I like my sauerkraut completely drained of its brine and mixed with a good quality 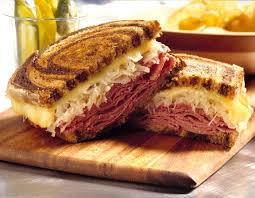 Thousand Island dressing. But I also want a bit more dressing spread on both slices of a great artesian marble rye. Add a nice slice of real imported Swiss cheese, a pile of thinly sliced cooked corned beef, and another slice of cheese. Grill this to a golden brown, and you have my kind of Reuben.

Did you know that Reuben has a sister by the name of Rachel? It’s true! The Rachael is made the same as a Reuben except with pastrami for the corned beef (some people use turkey), and coleslaw rather than sauerkraut. Try them both. You’ll be glad you did.