I was out with some friends at a popular fast casual chain restaurant that had just opened in Dallas when I first saw them on the appetizer menu–fried pickles.

“FRIED PICKLES! Who the hell ever heard of fried pickles?”

“You gotta try them,” one member of the group said. “They’re great!” 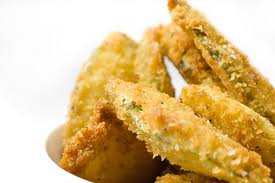 So being a curious sort, especially when it comes to food, I had to try them for myself. When the dish arrived at our table, I must say they looked good–somewhat like fat French fries. Now maybe it was just a mental block, since in my mind the whole idea of breading and frying pickles was kinda crazy, but I was not too impressed. That was in the early 1970s, and it would be some ten years later before fried pickles and I would once again cross paths, this time with a much better reception. 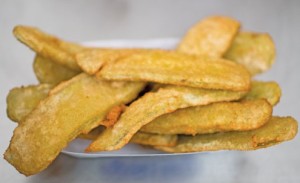 Like many of our foods, the origin of fried pickles remains a mystery, and the person responsible for popularizing the dish is surrounded in controversy. In April 1960, Bernell Austin (aka “Fatman”) opened the Duchess Drive-In Restaurant on a leased parcel of land in Atkins, Arkansas, across U.S. Highway 64 from the Atkins Pickle Company. In search of a gimmick to help attract more business, and after staring at the pickle factory every day, Fatman came across the idea of fried pickles.

After spending the next several months developing a recipe that was his own, Fatman began selling breaded and deep-fried dill pickle spears–fifteen spears for fifteen cents. Before long, The Duchess Drive-In’s fried pickles became well known for miles around the tiny restaurant. And while others tried to copy Austin’s idea with various degrees of success, none were able to duplicate his breading recipe, one that remains a family secret even today.

In 1968, the state of Arkansas opened Interstate 40 through Atkins bypassing The Duchess. This resulted in a drop in business, so Fatman opened a second drive-in restaurant near the new thru-fare to take advantage of its heavy traffic. The new restaurant, named The Loner, quickly became a popular stopping place for both locals and interstate travelers alike.

Fatman sold The Loner in 1978, retiring from the food business. Following his death in 1999, the Austin family continues to keep his memory alive by serving Fatman’s Original Fried Dill Pickles at the annual two-day Picklefest held in May in downtown Atkins, with the profits going to charities Fatman had supported through the Masonic Lodge. 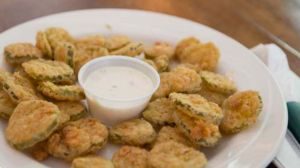 Mississippi also claims credit for commercializing the fried pickle. Tate Seldon’s Hollywood Café, originally located in Hollywood, Mississippi, began serving fried pickles in 1970. After a request from one of its customers, Seldon dredged crosscut dill pickle chips first through an egg and milk wash, then a mixture of flour, cayenne, chili powder and salt, and deep fried them to a delicious golden brown.

In 1983 after Seldon’s restaurant burned down, he relocated his cafe to a quaint 1922 commissary building in Robinsonville (also known as Tunica Resorts), a community just six miles north of the original location on U.S. Highway 61. Here, Hollywood Cafe continues to serve its popular fried dill pickle chips to hundreds of folks every month. 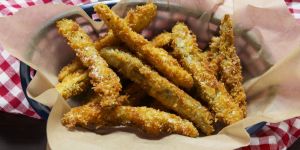 Today fried pickles can be found throughout the U.S. but are especially popular in the American South where they’re frequently served with a side of ranch or bleu cheese dressing, ketchup, or other dipping sauce. While any type of pickle can be used, dill pickles (not Kosher) seem to be the most popular in terms of taste, though many people say spears have the greater visual appeal. Whether to bread them or batter them is another subject of debate. In fact, about the only thing people seem to agree on is that the pickles, whether spears or chips, should be cut to a thickness of 1/4-inch and cooked while cold.

So whether it’s spears or chips, fried dill pickles are an absolute must try.