Growing up in the mid-twentieth century, I observed first-hand a number of food innovations and convenience products that directly affected how the American housewife prepared the family meal. Arguably, the one product that brought about the biggest change was the invention of boxed cake mixes.

I can remember when every pie and cake my mom baked was made from scratch. Then came the fifties and, like other American households, convenience items became commonplace in our home, as well. It seems my mom fell in love with Betty and Duncan, eventually even turning to canned frostings. From those days forward, only after much begging would she make one of her popular scratch cakes, and I’m honestly not sure she didn’t do a little cheating even then.

Boxed cake mixes in America actually got their start in the early 1930s when P. Duff and Sons, a Pittsburg molasses canning company, found itself with a surplus of molasses.

Later that year, Duff applied for a U.S. patent for his new invention. In his application, Duff explained that for housewives to go to the expense and inconvenience of maintaining the ingredients needed to bake cake for their family was no longer necessary when they could purchase a can of Duff and Sons gingerbread cake mix for 21 cents a 14-ounce can. Yes, cake mixes were first marketed in cans.

“When I got to France I realized I didn’t know very much about food at all. I’d had those cakes from cake mixes or the ones that have a lot of baking powder in them. A really food French cake doesn’t have anything like that in it – it’s all egg power.” – Julia Child

By the end of 1933 Duff’s baking mix, now available in other flavors including devil’s food and spice, was granted its first patent–no. 1,931,892. However, in an effort to improve its mixes the company had already began tweaking its formula. John became aware that the taste of his cake mix was a bit off due to the use of powdered eggs, so his new formula required housewives to add fresh eggs. Not only did this change resolve the 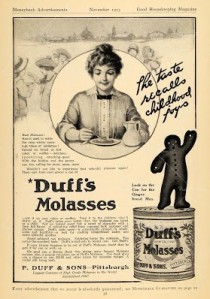 off-taste issue but actually improved the rise and texture of the finished product. On June 13, 1933, Duff filed for his second patent, writing in his application, “The housewife and the purchasing public in general seem to prefer fresh eggs and hence the use of dried or powdered egg is somewhat of a handicap from a psychological standpoint.” On October 8, 1935, patent no. 2,016,320 was granted.

Probably the most well known myth about cake mix development is that Ernest Dichter, psychologist and the man who coined the phrase “focus group,” was working with General Mills on how to improve cake mix sales. As the story goes, Dichter determined that housewives wanted more involvement in the baking process, so from then on Betty Crocker cake mixes required adding fresh eggs. While Dichter did work with General Mills, he did so in the 1950s, some fifteen years after Duff was granted his patent for eggless cake mix. A later survey determined that although homemakers said they preferred to add their own eggs, they really liked the convenience of those mixes that include eggs.

By the end of World War II and the late 1940s there were more than 200 brands of cake mix, including labels like Swans Down, Dromedary, X-Pert, Helen’s, Joy, Occident, and PY-O-My. Of course, the largest share of the market was held by the big flour companies who had spent the war years getting ready to jump into the cake mix game once our troops were home. Taking a lesson from J. Duff and Sons, flour mills decided they had to do more than just sell flour–convenience was now the name of the game.

“My idea of baking is buying a ready-made cake mix and throwing in an egg.” – Cilla Black

It is interesting that while as previously mentioned American housewives really liked cake mix that included eggs, only Pillsbury stayed with the add water only mix, while GM’s Betty Crocker and Consolidated Mills’ Duncan Hines (later sold to Procter & Gamble) went the add-your-own-fresh-eggs route.

Between 1956 and 1960 cake mix sales began to flatten (increasing only 5% during that time) and many companies shut their doors. The remaining cake mix companies began searching for what went wrong and what was needed to kick-start sales. Enter marketing psychologist Ernest Dichter, who proclaimed the problem to be frosting, not eggs. Since baking the cake was so simple, the housewife wanted to make the baked goods their own through cake decorating and other creativeness. Soon photographs on cake mix boxes and in magazines began to showcase elaborate cake constructions and over the top icing techniques. It is interesting that a product developed to save time has since become a culinary time-filler.

Today, boxed cake mixes are a staple in every supermarket, household pantry, and yes, many commercial bakeries in the United States, as well as most developed countries in the world. And with American home bakers using more than 60 million cake mixes a year, the homemade scratch cake is quite an endangered species.

Several years ago, I did a stint as executive chef at a busy Texas hotel. Once or twice a month, usually after a busy Friday night, the kitchen staff and I would meet at Evelyn’s Café for a late-night breakfast before going home. Evelyn was known miles around for was her delicious three- layer carrot cake—moist, not too sweet, filled with crushed pineapple and pecans. Fluffy cream cheese frosting was generously stuffed between each layer, and thick swirls of the stuff covered the cake’s top and sides.  And the wedge they gave you was big enough for two normal people to share, though I enjoyed each and every bite by myself, as carrot cake has always been one of my favorite cakes. Evelyn’s suddenly closed in February of 1989 and with its closing went the recipe for her signature cake.

In spite of what some think, tomato soup cake was not the invention of Campbell Soup Company, but rather the creation of Depression-era housewives.

Recipes for tomato soup cake (sometimes called “Mystery Cake”) first began making its appearance in community cookbooks during the 1920s and 1930s. Tomato soup concentrate was used in place of milk, butter and other dairy products to bring moisture and texture to this unusual dessert. After all, these products were hard to come by during the country’s Great Depression.

Campbell’s Tomato Soup was introduced to the American consumer in 1897, but the company didn’t open their test kitchen until 1941. And though Campbell’s was quick to develop their own version of tomato soup cake and use it to promote their soup, the first version was more like a British-style pudding than a cake. It was 1966 when Campbell’s finally came out with the modern version of this once popular cake.

Adventurous readers feeling up for the challenge can find the recipe for Campbell’s Spicy Tomato Soup Cake in the recipe section of this blog.

Originally carrots grew wild in what is now southern Afghanistan. Quite different from the sweet, orange variety so popular today, these small, woody, unpleasant tasting purple roots were used primarily as a medicine and its seed as a spice. Silk traders eventually brought the seeds to Western Asia where after centuries of cultivation the anthocyanin pigment was bred out resulting in pale yellow carrots with better taste and texture.

In the 10th century the yellow carrot made its way to Holland where by the 13th century it was further improved and was being planted throughout France and Germany as a food crop mainly for the wealthy. Continued selective breeding eventually produced an orange carrot quite similar to those available today.

Carrots were first brought to North America by the colonists and generally used only in stews and soups. By the end of the 19th century, the French had introduced a longer, sweeter variety of carrot that was tasty both cooked and raw. This new, modern carrot found instant commercial success in both Europe and America.

The exact origin of the carrot cake is somewhat debated although most food historians feel it descended from the carrot puddings of Medieval Europe. Over the years these recipes took on several forms—some were steamed like pie and served with a sauce, others were baked in cake pans and glazed like a cake. One of the earliest recipes for a true carrot cake appeared in a 19th century French cookbook printed in England. Another early recipe was published in Switzerland where according to the Culinary Heritage of Switzerland it is still the most popular cake in the country, especially for children’s birthdays.

Likely the first recipe in the U.S. for modern carrot cake appeared in The 20th Century Bride’s Cookbook, published by the Twentieth Century Club in Wichita, Kansas in 1929. After World War II, bakers began applying the chiffon principle of eggs and oil to carrot cake, which resulted in the dense, tender and moist cake we know today. 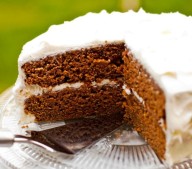 community cookbook published by a local radio station. And while it was absolutely delicious, I’m sorry to say Evelyn’s was better. I only wish I had been able to get Evelyn’s recipe before the café doors closed. With that said, I have included my mom’s version of carrot cake which I believe you will enjoy.